Above and below – Our amazing Great Barrier Reef

As the largest living structure on the planet, the Great Barrier Reef is incredibly rich and diverse.  Stretching 2300 kilometres, this natural icon is so large it can even be seen from outer space.  Extends south from the northern tip of Queensland in north-eastern Australia to just north of Bundaberg, is between 60 and 250 kilometres in width and has an average depth of 35 metres in its inshore waters, while on outer reefs, continental slopes extend down to depths of more than 2000 metres

Satellite Image of Part of the Great Barrier Reef

While it’s known mostly for its large maze of colourful reefs, its intricate architecture also provides a home for a huge number of plants and animals.  Some of these, such as turtles and crocodiles, have been around since prehistoric times and have changed little over the millennia. 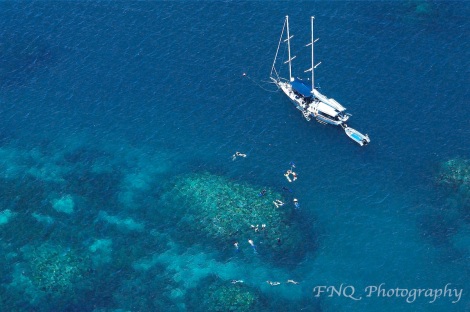 Exploring the many reefs

The Great Barrier Reef is also unique as it extends over 14 degrees of latitude, from shallow estuarine areas to deep oceanic waters.  Within this vast expanse are a unique range of ecological communities, habitats and species – all of which make the Reef one of the most complex natural ecosystems in the world.

Stop of at Vlassoff Cay

While coral reefs initially made the Great Barrier Reef famous, they only comprise about seven per cent of the Marine Park and the World Heritage Area. The rest of the Marine Park is an extraordinary variety of marine habitats, ranging from shallow inshore areas – such as seagrass, mangroves, sand, algal and sponge gardens, and inter-reefal communities – to deep oceanic areas more than 250km offshore.

Rather than having one level of protection throughout the Marine Park, the area is instead divided into different zones. Each zone has different rules outlining permitted activities and those that are prohibited.